Do you like clothes? Do you buying them, wearing them, and then dropping them off at the wash & fold to pay exorbitant prices for other people to fold your undies? Me too! However, our new apartment actually has laundry in the basement and so it is hard to justify paying around $30 when we could easily use 37 quarters to fold our own undies.

This brings us to: THE HAMPER.
In apartment living, the hamper generally ends up living in your (already crowded) closet or along the wall for easy access, yet valuable space is being taken up by a bag designated for your dirties. 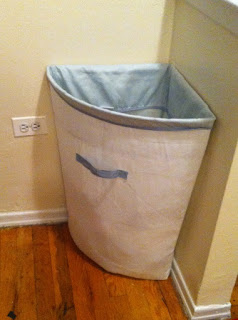 Look at how nicely it fits! I am super excited to have a laundry basket that is designed to take up as little room as possible. Plus, it still holds a lot, and the liner is removable to facilitate an easy trip down to the communal laundry room. Now there will be so much more room for shoes, my husband better watch out as his excuse "we don't even have room for the 47 pairs you already own" is now invalid...

**This is from Target, however I could not find a link on their website. I took this picture with my camera phone so it's not as good as I would prefer for an online photo. Oh well.
Posted by poverbaugh at 3:52 PM 2 comments:

As many people know, I love me some wine. Wine = good and there is nothing you can say that will change my mind... Unless you are trying to serve me a box of California Chardonnay you bought for $4 dollars and are convinced it is a "really good value, look how many glasses you get out of it!" Please, save that for when your in-laws are in town.

However, loving wine means enjoying it in proper stemware, and wine glass storage in a small apartment tends to be somewhat problematic. Wine glass suppliers have convinced the world that each type of wine needs its own glass, and so your cupboards can get over run with bulbous glasses that cannot be stacked or combined in any other space-saving sort of way. I was at a lovely dinner at a friend's house the other day and he pointed out their ingenious solution - under cabinet wine glass storage: 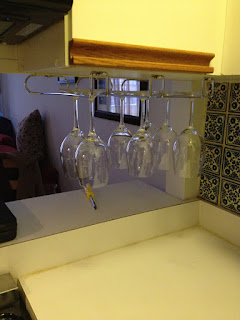 You see these glass storage racks at numerous bars and restaurants, but I have rarely seen them implemented in apartments. We sadly do not even had the space to hang a glass holder like this, otherwise this would be purchased and hung this afternoon. Instead, my sister gave me this wine glass drying rack, wich we have put to permanent use on our kitchen shelf *: 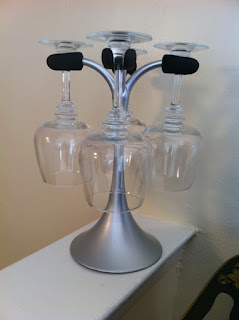 I have come across something I MUST HAVE, which is this awesome little spice rack which, for lack of a better description, is a wall-mounted-magnetic-spice-board. Since the lids are clear, the spices can be viewed very easily and I'm sure you could easily add your own labels in case some of the spices are hard to tell apart.

We generally buy spices as we need them and then they sit in the cupboard. Since I am five foot nothing, I have encountered another problem where I have to jump up on the counter, kneel in front of the cupboard, then go through all the spices while I am cooking. So this actually saves valuable cupboard space and shortens my cooking time. Double score! 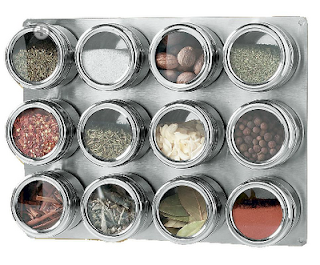 Posted by poverbaugh at 8:40 AM No comments:

Well well well, we're all moved in and although the new apartment is bigger, the layout creates some problems for storage. In our last apartment, we were very spoiled with things like an over-the-closet storage area and a giant hall closet which I can only compare to Monica's junk closet from Friends. I am actively researching more solutions and they will be coming in future posts!

Our kitchen is still the main cause of concern for storage items, which I'm sure many people can relate to. The Napa Kitchen Center turned out great, and certainly adds a good amount of counter space as well as two small cabinets and some shelves. However, the cabinets under the sink are too short for our garbage can and there is not much space to shove it in a corner somewhere unobtrusive. Since counter space is always at a premium, I found this second kitchen island which I am going to purchase once my bank account has replenished: 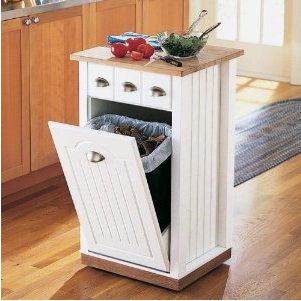 Look! This little island fits a 13 gallon garbage can so snuggly! The only real deceiving part is the island includes only one drawer, not three. However, one big drawer is probably more convenient then three little ones though, so I'll let it go.

The measurements are 18w x 18d x 35h and will fit perfectly in the corner of the kitchen. I suppose landlords figure if you can afford the rent, you can afford to supply your own counter spaces as well???
Posted by poverbaugh at 7:18 PM No comments:

Kitchen counters in NYC are a precious commodity. You don't realize until you don't have them how handy they come in for preparing food... try preparing a multi-course dinner for friends while using two square feet of counter space to chop and season food, a stove top that doesn't allow for multiples pans to rest evenly and throw in a dish rack (dishwasher? No way, landlords think hand washing is the only way to go) that takes up the other square foot of counter space you have, and you realize why take-out is so important for New Yorkers.

Here is a picture of my last kitchen: 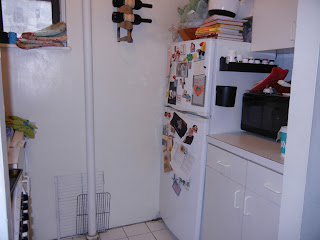 Here is a picture of my new kitchen: 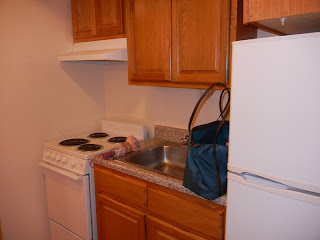 You didn't think it could get smaller, did you?? I didn't either. Did you notice there are no drawers, and the only counter space is actually JUST the the space where the sink is... There was actually SUPPOSED to be a dishwasher, however the sneaky management company decided to remove it without telling us, so those bottom cabinets wouldn't even be there if the dishwasher was installed.


Luckily, someone who obviously lived without counters invented this: 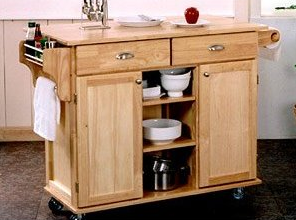 Ta-da! Instant counter and storage space. Now if they only sold it already assembled...
Once the hubs and I put it together, I'll update you on how awesome it is to have rolling counter space and a paper towel holder. Find it here: Napa Kitchen Center

Posted by poverbaugh at 5:29 PM No comments:

Do you live in NYC? Is your apartment so small that you wonder what you are doing with your life/money even though you insist New York is the best city on earth? Have you ever moved and found so much crap shoved under the bed and in the closet you have to question your purchasing decisions, especially when it comes to gloves, scarves, purses, and cat toys? Then you've come to the right place!

I started this blog after I moved from one tiny apartment to another (slightly bigger) tiny apartment on the Upper East Side of New York. Frustrated with interior decorating websites that show only the gorgeous post-renovations done to small apartments, I wanted to share products and thoughts about the average NYC renter who can't renovate their apartment and add all the glorious closets and shelving space they need. If anyone is listening, can you please send me shelving that I can either fit through my door or can assembled in less then 36 hours? Thanks!
Posted by poverbaugh at 2:02 PM No comments: