240 square feet is way too small

Ah! I just found an article about this Brooklyn couple who live in 240 sq. foot studio. Tiny apartments are all the rage! The girl has a lifestyle blog where she regularly updates with tips about their space, but it has more to do with organization and hiding all your clutter, which unfortunately none of my furniture does. Why yes, I do think we should get a desk, bookcase and media center* that do not have drawers or doors, so that all our stuff is just everywhere, all the time. 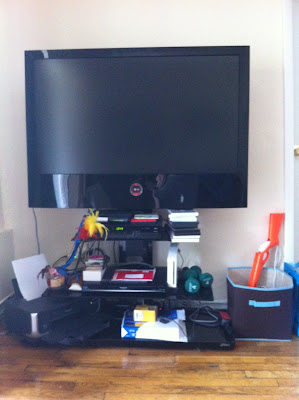 I love the concept and aesthetic idea of the open furniture idea, however I've found that it would be nice to shut away the mess that life inevitably makes. DVDs? Wii games? Big Buck Hunter gun? Free weights? An amazing assortment of non-useful business cards? Let's just put them all right here. On top of that, since all the furniture is black, dust shows up really well. I am obviously single handedly keeping Swiffer in business with all the dusting I do. So, future me, let's remember to buy furniture that can shut away messes and doesn't emphasize every speck of dust that manages to show up.


*You may notice this doubles as cat toy storage area too.


Posted by poverbaugh at 6:48 AM No comments:

So The Daily News recently published an article about Mayor Bloomberg trying to make more affordable housing for single people to live in the city. Basically, the article says that even though there is a rule that says all new apartments must be built larger than 400 sq. feet, he plans to have architects draw up plans for 275-300 sq. foot apartments, which will cost less then $2,000 per month, therefore allowing for "affordable" housing in Manhattan. While I think  it's a great idea to promote affordable housing, our first apartment was a 1-bedroom, about 400-450 square feet and we paid less than $2000. So IMHO, these apartments should be under $1,500. Even if you have a reasonably* well paying job, yet an NYC dweller  would still struggle to pay that rent on their own.

Here is a layout of the apartment: 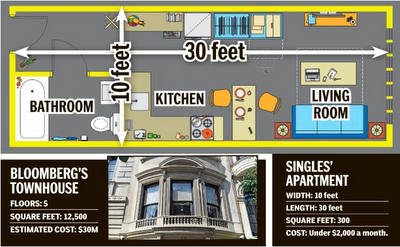 One of my girlfriends had an apartment similar to this on the UWS, and hers was just a "normal" studio, not a microstudio. It was laid out almost EXACTLY the same, but it was plenty big enough for her to live there by herself. I think she paid around $1,300 when she lived there a few years ago, so maybe it would be around $1,600 or $1,700 now.

So Mayor Bloomberg, if you're reading this, these better be top notch microstudios to make me feel like you aren't just darting around the new "must make all apartments bigger than 400 sq. feet" rule that has recently just been put in place.


Posted by poverbaugh at 7:46 AM No comments: