So I thought I should add what my ACTUAL bathroom looks like, since I was so smitten with the purple bathroom I posted a few days ago. Let me just preface that my bathroom looks NOTHING like the cool purple bathroom, but I don't mind this one. Even though the bathroom is small, it actually has decent storage. I once looked at a two bedroom* apartment in soho/china town and the bathroom was so small, that if you were sitting on the toilet you literally couldn't open the door and had zero storage. Ideally one frat guy who was never home could live there by himself... if girl roommates were there it would've involved elaborate storage rig ups, shower caddies and knife fights over the bathroom mirror "vanity."

The one thing that drives me nuts is that the "architect" didn't realize that if you switched the sink with the toilet, the door would totally open ALL THE WAY and I wouldn't have to use my bathmat as a door stopper. At least this bathroom isn't a stand-up shower that shares space with the kitchen, as some LES apartments are known to have. 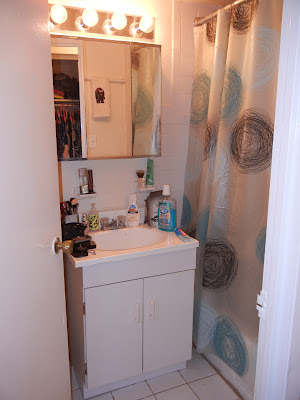 Here is the best picture I could get of the full bathroom. If you will note, the door only opens this far because it hits the toilet and will not open all the way. 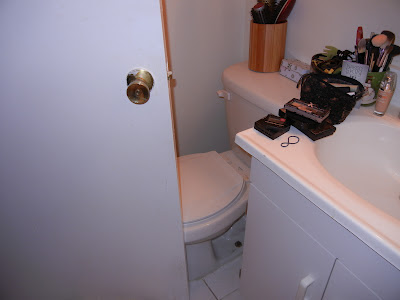 Here is the toilet, being hit by the door 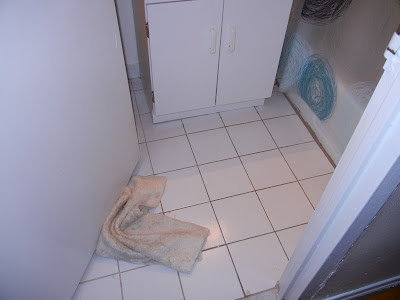 Here is my bathmat, aka doorstopper

I have to take my own advice and hit up Target for some shelveing. As you will note, my makeup is overflowing the sink area and hubs' mouthwash takes up the other 1/3 of the space.


*It was a "cozy, well located" two bedroom in NYC realtor speak. If it were used as a two bedroom, there was no living room. To anyone else, this is generally known as a tiny one bedroom above the noisy chinese restaurant.