A wall mount that works

On a recent trip to Target, I bought these cute little $10 shelves that I planned to put up in the kitchen  to add a little extra space for Ipads/spices/jars/etc... But mainly to put my Ipad on the wall as I have no room in the kitchen to prop it up and read recipes. Drill the wall, pop on the wood, and voila, perfect tiny shelf.

What happened next was what I like to call the great-husband-anger-inciter-incident of 2012. How hard could one little shelf be to install? Apparently equally as hard as getting customer service to help you with an Apple product if you don't have AppleCare. Angry mutterings, cursing and wall hitting ensued, until the shelves went directly into the garbage and Target was banned from selling me any such shelves ever again.

Cut to another trip on a plane where I was stuck without anything to read during the ascent, and SkyMall was just beckoning for me to  read about all the wonderful inventions that can't be sold anywhere on the ground. Flipping through, I found this, this and most notably this which almost made me pee my pants and wonder who buys this stuff. However, I did spy one useful gadget that would most certainly solve my kitchen shelving problem. The Koala Ipad Mount is made specifically to mount  a tablet or phone on the wall to free up your hands and table space: 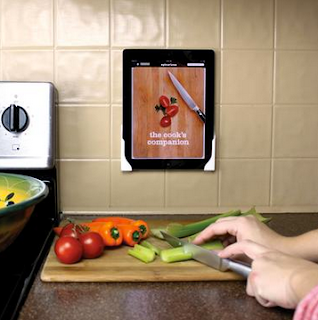 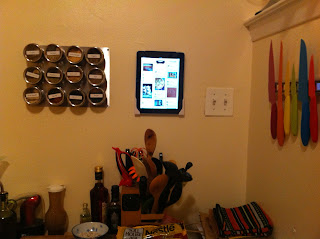 The two little plastic pieces are engineered to hold a device securely while heavy duty wall stickers (most notable for hanging college dorm art) on the back for easy installation and easy removal that causes no damage to the walls. This is important, because we now have two holes in the wall from drilling that we need to spackle over to cover the damage. I installed the Koala mount myself, and it was pretty easy... Just place the Ipad in the mounts for correct spacing, remove adhesive protectors, push against the wall for 60 seconds and voila, installed. I actually downloaded an App with a level to make sure it was even, and that made it super quick. Now all my recipes are right at eye level and out of the way, so thank you SkyMall for having something other than this type of gadget to purchase! 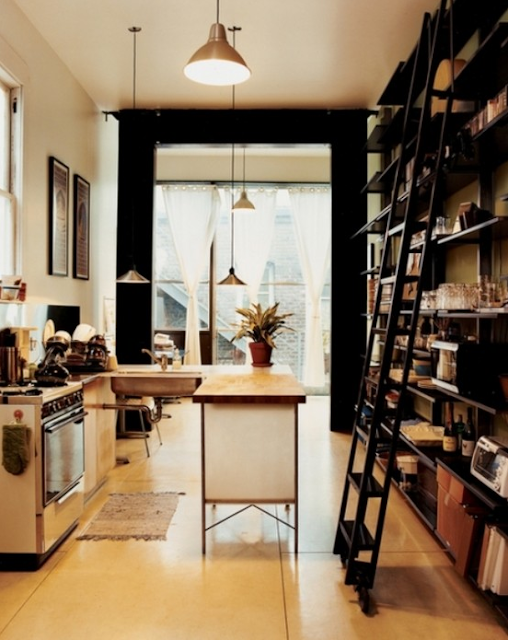 I love the look of this kitchen-nestled-within-a-library feel, but that ladder would have to be moved out of the way before the 1000th time you tripped over it, no? Also, where is the fridge?

Houdini is still at it

Working in the wine industry, one thing that clutters up my apartment is wine bottles. Now, before you email me all "wah wah, 1st world problems" & "Really, that wouldn't be a PROBLEM in my house!" I am not complaining about this, just noting that I have to find as many solutions as possible to keep the clutter at bay. In our last apartment, the bottles lived along the path from the bedroom to the bathroom and that created 2am problems where many a wine bottle got kicked over and stubbed toes were a plenty.

In addition to wine, I love great design, and the MoMA store is pretty much a never ending source of great design for your house. Take this Houdini wine rack: 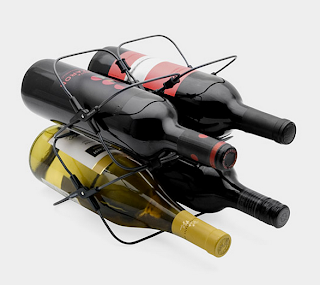 Here the wine rack is pictured at its most basic, 4 bottle storage. BUT this amazing little rack can be folded flat for easy storage PLUS you can add multiple racks together to create larger storage, up to 48 bottles. Here are a couple other ways you can lay out this rack to suit your household needs: 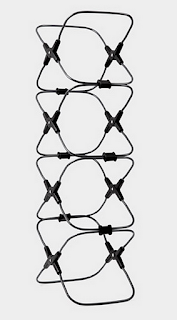 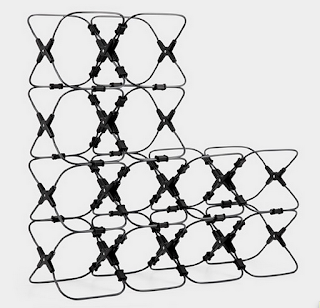 for the more intense wino

To quote (the always awesome) Harry Houdini: "My professional life has been a constant record of disillusion, and many things that seem wonderful to most men are the every-day commonplaces of my business."

Posted by poverbaugh at 7:42 AM No comments:

If you're lucky enough to have a washing machine...

Even though I am a big fan of eReaders, when you are on a plane and enjoying the hilarious book "King Dork" and then the flight attendants are all "switch off your device!"and you forgot to grab an US Weekly magazine from Hudson News and you realize the only thing you can do for 20 minutes is read SkyMall, you really wish the eReader was approved for take off.

Now, most of the things they offer are hilarious and absolutely ridiculous (like this mask), however as I was perusing I noticed this actually-really-good-idea for an ironing board: 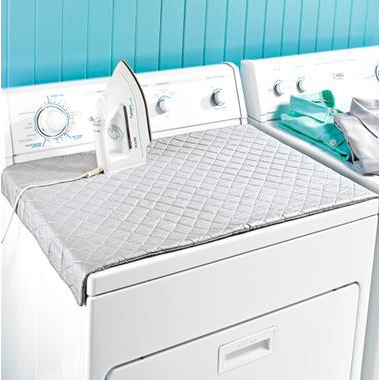 Lay this heavy, ironing board fabric down on top of your washer and tada! Instant ironing board. It has magnetized sides so the fabric stays in place and folds up really small and easy to store. If you are one of the lucky few to have a washer/dryer in your apartment (that isn't stacked), this solution makes total sense. Ironing boards are a big hassle to drag out and find space to open & use, so this invention is genius. Plus, it only costs $9.98 which is less than a glass of wine at most bars!


Posted by poverbaugh at 7:12 AM No comments: